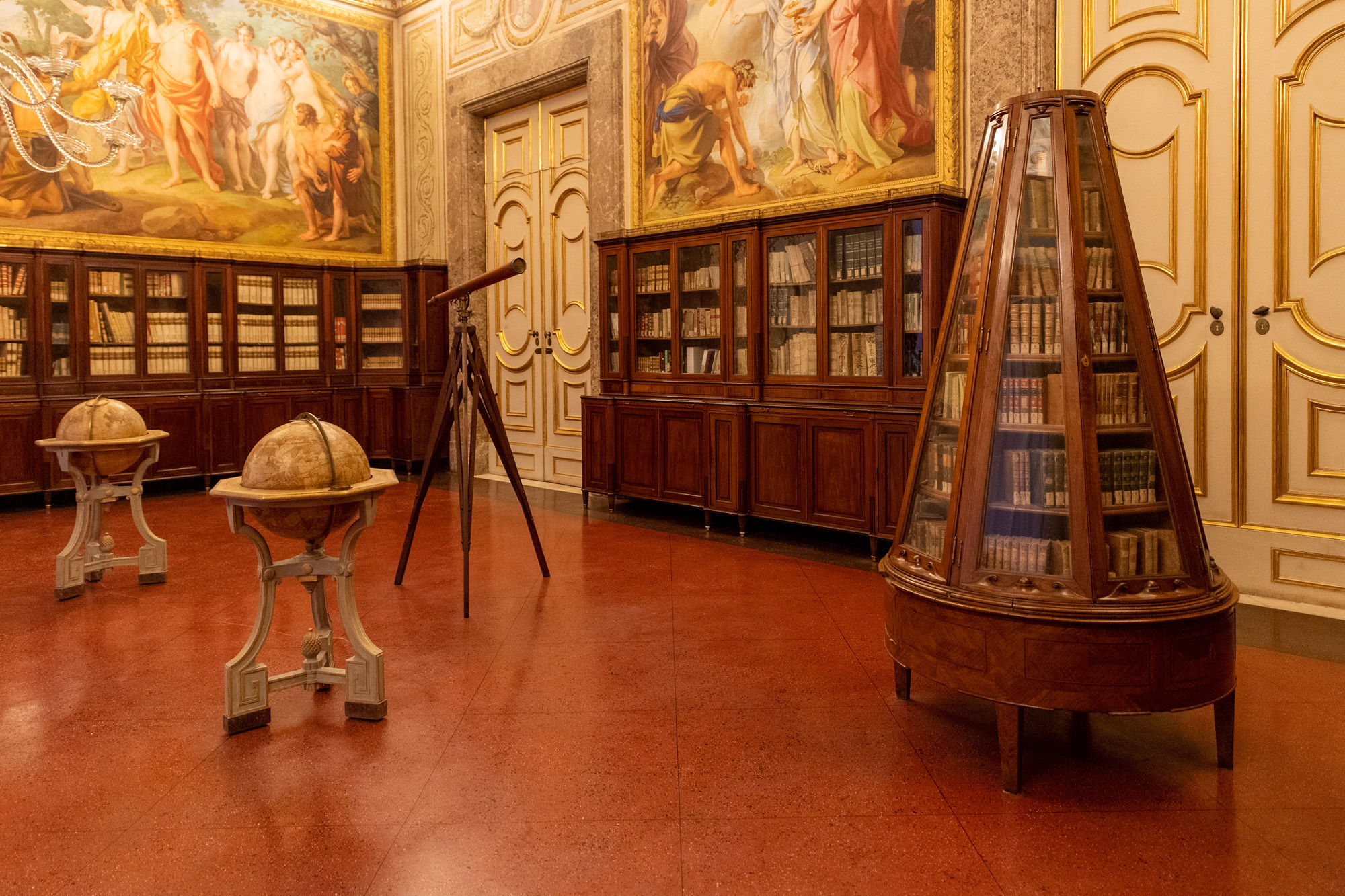 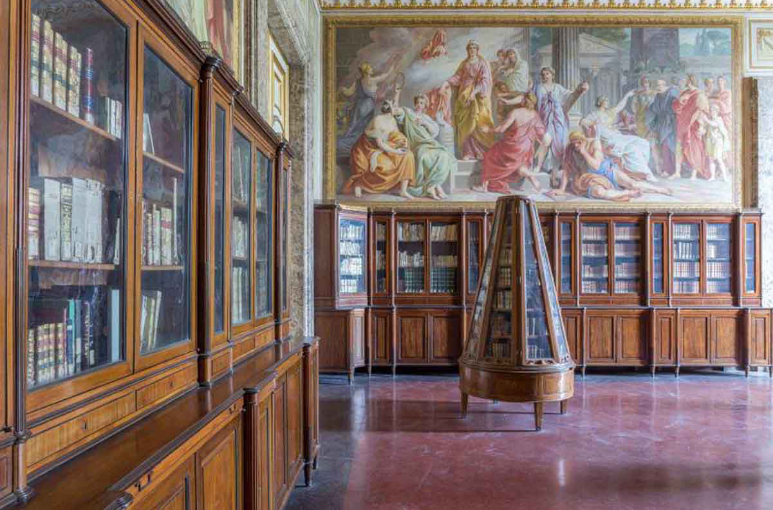 The Palatine Library currently occupies three chambers and two antechambers, part of the museum itinerary, situated before the Elliptical Room. In 1803 its book collections numbered 2946 works, for a total of 7201 volumes. Many of these followed the Bourbons to Sicily during the French occupation but returned to Caserta with the Restoration. The library continued to grow until 1860. Numerous missing works were re-attached to the library in the early decades of the twentieth century, before the Second World War left its sad mark with theft and damage. The numerous historical catalogues of the Palatine Library of Caserta allow you to evaluate and learn about the variations of a valuable collection, a witness to the taste and culture of its time. The library’s assets are entrusted to specialized personnel and to the care of the Restoration Laboratory for Archival and Book Heritage, which takes care of its maintenance, conservation and restoration. 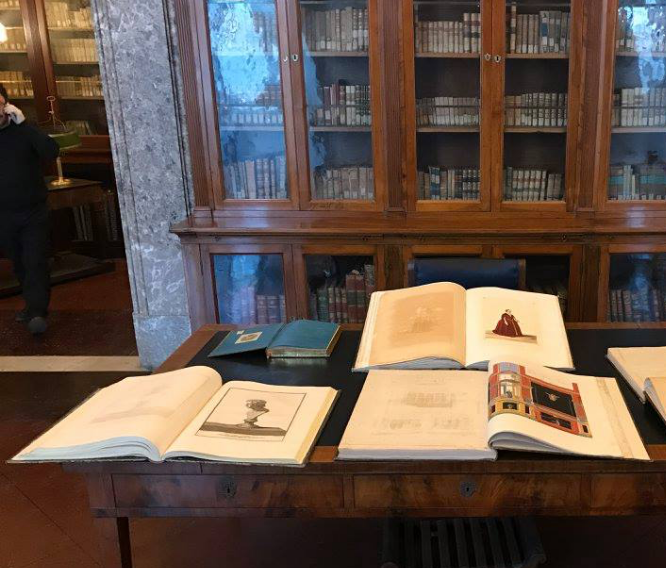 The rooms in the Palatine Library are part of the tour of the Royal Palace. The consultation of the historical volumes is carried out and granted exclusively by formal enquiry, for proven scientific research reasons. Applications to obtain access to the Library must include: researcher’s curriculum vitae, cover letter, an abstract of the research project, duly completed request form. All the above is mandatory in order to gain access, any incomplete request will not be considered. 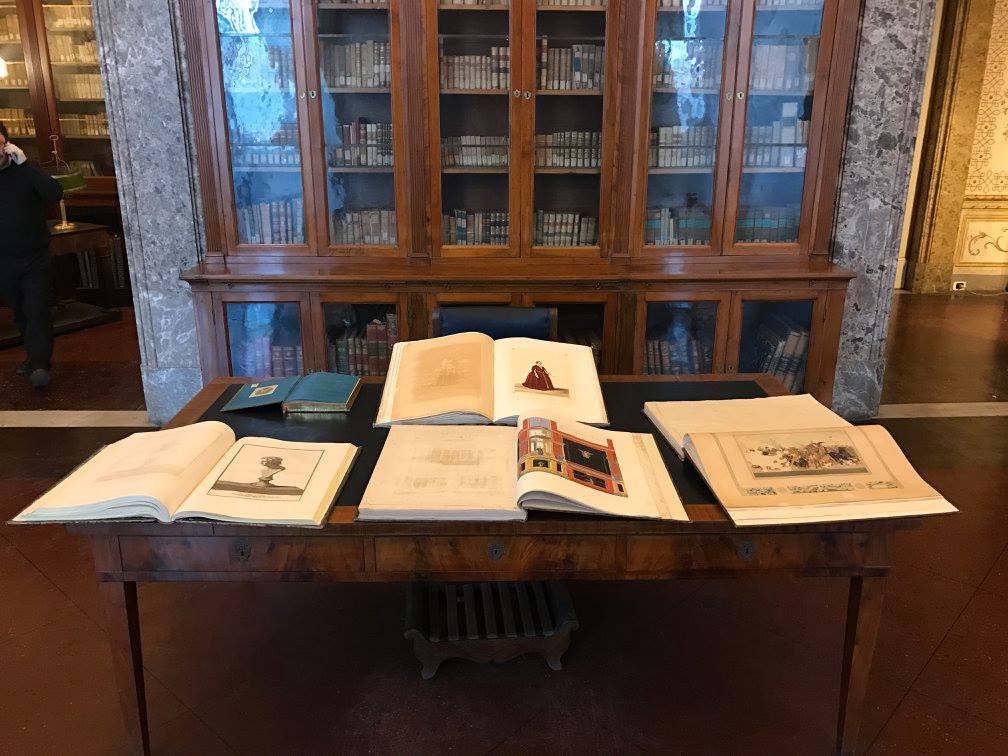 The oldest catalogue consists of a volume drawn up in 1803, bound in leather and decorated with the gold monogram of Queen Maria Carolina. The first part contains the alphabetical index of the authors, followed by the books catalogue formerly kept in the first room divided by category (religion, history, dictionary, natural history, fine arts, poetry and travel, government, education). The second part refers to the third room of the library ordered by inventory number. Most of the works quoted in the two volumes can be found in The Catalogue of His Majesty the King’s Private Library, published in Palermo in 1808. The book collection followed the Bourbons in Sicily. Maria Carolina’s German books were left in Caserta and Naples, closed in 32 crates at the Palazzo Croce’s Library, found on Ferdinand’s return in 1815 and sent to the Bourbon Library (now the National Library), where the books were catalogued by Pelagio Rossi . Unfortunately, no catalogue or inventory testifies to what remained or what was brought to the Palatine Library of Caserta during the period of the French occupation. 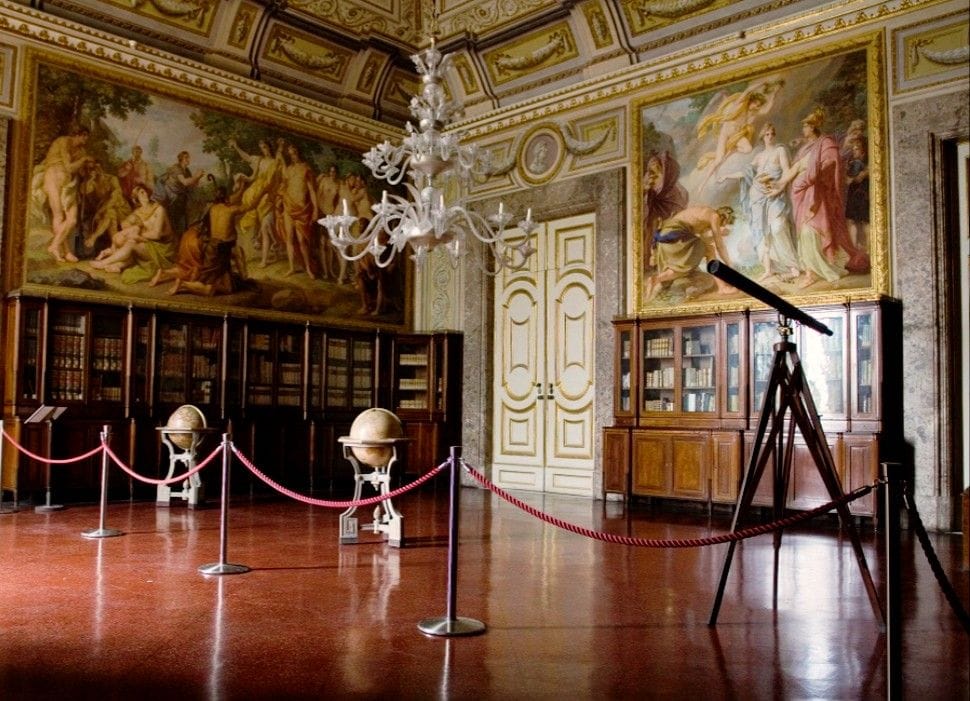 The Palatine Library and The Restoration: from Ferdinand I to Francis II (1815-1861)

In January 1834 the Palatine Library of Caserta was equipped with a “1st Entry Register of new books”, witnessing the entry of 1818 volumes by the end of 1835. Many of these arrived in Caserta through the office of the Royal Controloria and the Secretariat of the Royal House, others were gifted or purchased under press rights lawfully regulated  in 1822. In 1857 a new inventory was drawn up by the royal librarian Francesco Ceva Grimaldi. The library collections were reorganized into eight classes: religion, legislation, science and fine arts, fine literature, history and geography, bibliography, encyclopaedia and journals to which the miscellaneous were added. 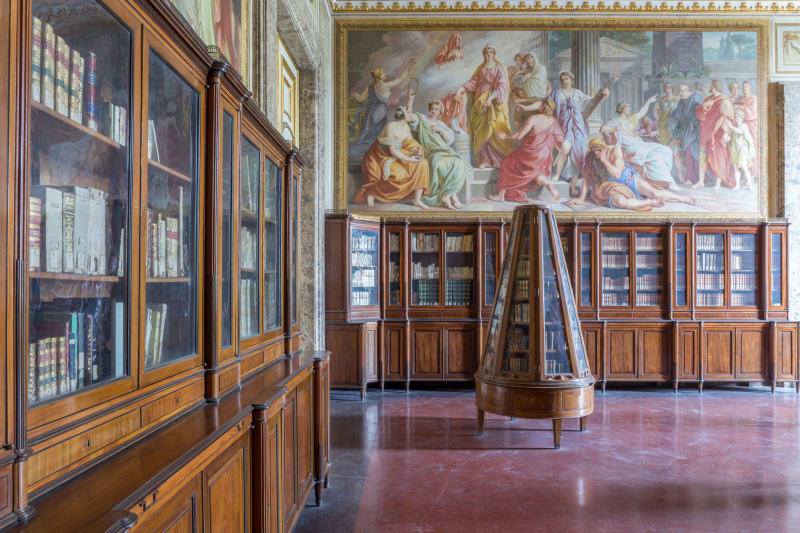 Between the Unification of Italy and the Twentieth Century

There is no testimony of any changes to the collections of the Palatine Library after the annexation of the Kingdom of the Two Sicilies to the Kingdom of Italy. A new inventory was issued between 1879 and 1889, from an administrative reorganization of the library viewpoint. Many annotations allow to identify the officials who brought back volumes dispersed in the numerous spaces of the Palace to the library. Among the works found, there is the collection of laws of the Kingdom of the Two Sicilies recovered by Guido Franci in 1909 together with a hundred other volumes. In 1924 a further inventory was made when the Palatine Library passed to the State Property. Giovanni Adamo, a Royal House official, Vitaliano Rossi, a Caserta registry attorney and Vincenzo Senese, a Superintendency of Naples official, created an “Alphabetical Catalogue by Author”, still in use.During the Second World War the collections of the Palatine Library suffered heavy losses: a new inventory was drawn up by Giuseppe D’Anna between 1951 and 1954.